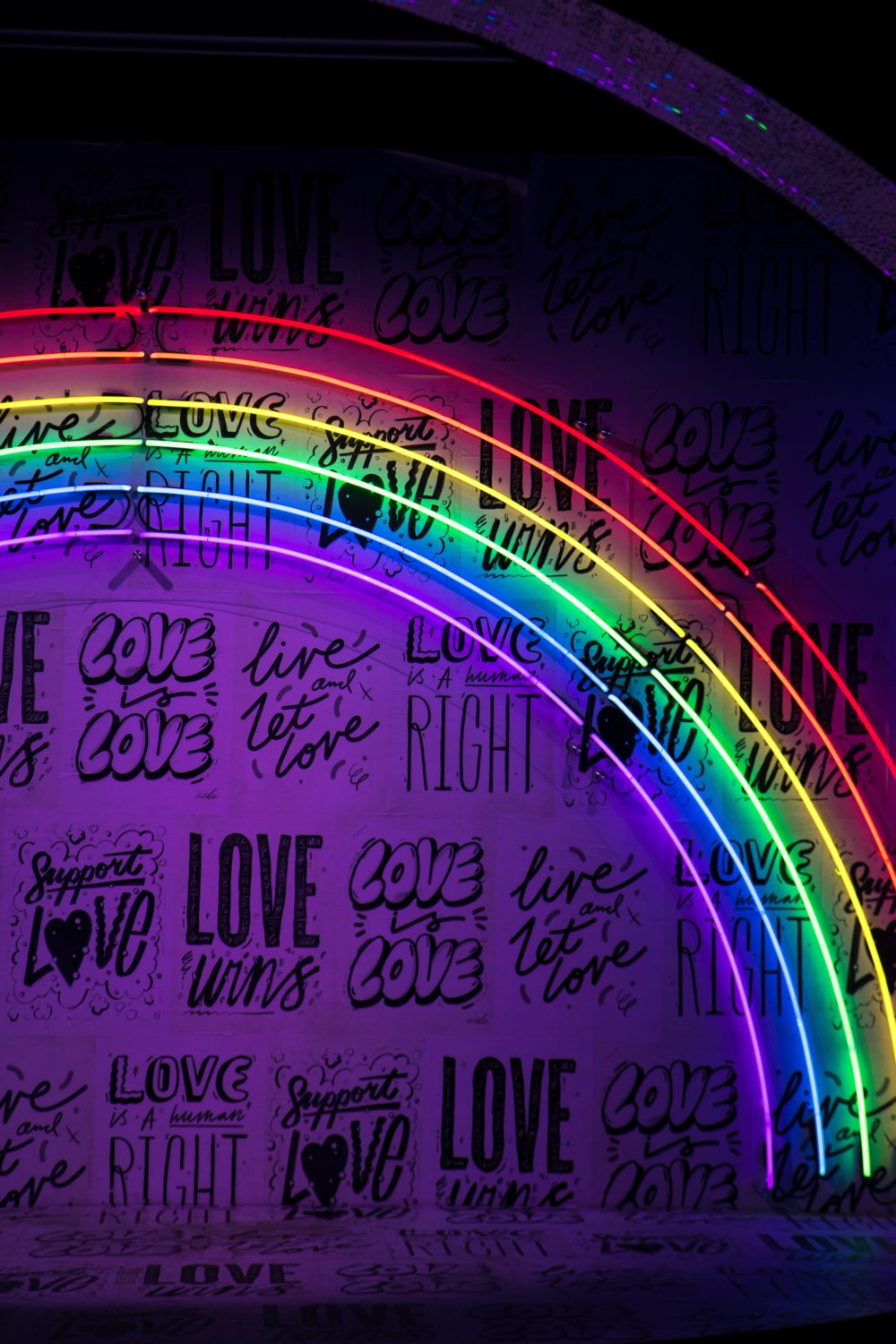 As you might already know, June is Pride month. June was chosen as the month to celebrate the LGBTQ+ community to commemorate the Stonewall riots, with 2019 marking 50 years since the event.

Before we get into it, it’s important to understand the modern history of LGBTQ+ rights and culture. Although we mostly recognise Pride month with celebrations, parades and commemorative cultural events, it’s important to remember where it all started.

On June 28th 1969 members of the LGBTQ+ community rioted, following a raid on the Stonewall Inn, a gay bar in Greenwich Village, New York City.

This and the following riots and protests became a watershed moment for the modern movement for LGBTQ+ rights and a cultural change – the first pride march was coordinated later that year. Since then, there have been improvements in rights such as the legalisation of gay marriage in some countries, however, there are still huge and life-threatening issues all over the world facing the LGBTQ+ community.

Note: This is only a tiny overview of what happened and it’s important to understand the origins of this significant event and the people involved. I encourage you to click here to learn more about the Stonewall Riots.

An increasing number of brands have been celebrating Pride month, in recent years. Although many see this as a way to expand the support for LGBTQ+ people and raise awareness, it also begs the question if too many companies are commercialising pride events for their own gain and reaping the benefits through merchandising, without paying back to the community.

For many brands, their pride strategy too often entails one of the following:

And although these are could be seen as a ‘good effort’, the unfortunate thing about the majority of the brands who do this are simply paying lip service to appear more socially conscious. When the real truth is that many will still associate with known institutions that have anti-LGBTQ+ agendas and laws and won’t push for better societal changes in the wider world.

There is also the question of brands, particularly clothing brands, who create pride products, which are often made in sweatshops, by underpaid workers in countries which do not support the rights of LGBTQ+ people. Not to mention too many brands are still owned and operated by people with anti-gay belief structures, but who are happy enough to profiteer from the community, whilst simultaneously offering not restitution to people or charities or support structures put in place to offer support.

Too many ‘gestures’ of support for the community are empty and consumers should be wary of brands promoting pride. It’s important for brands to back up the community in very real and responsible ways, rather than simply making money from them.

In 2018, Adidas released a range of merchandise designed to honour pride month. With a bespoke area on the site, titled ‘Pride Pack’, customers could purchase shoes and apparel in a range of pride inspired colourways, both online and in store.

Although the limited range is running again this year, in 2018, the brand invited a range of celebrities to design their own take on the Samba trainer, which were to be auctioned off for the Albert Kennedy Trust – a charity which works to protect homeless LGBTQ+ youths.

Many people still question the validity of the Adidas take on Pride, when the brand still maintained its spot as a major sponsor for the 2018 World Cup, which was hosted in Russia, a country with notoriously and increasingly anti-LGBTQ+ laws.

Not to mention that the majority of Adidas products are created in factories in the likes of China, Vietnam, Thailand and Indonesia – countries which still have varying degrees of anti-LGBTQ+ legislation in place which can affect anything from social rights and job opportunities to the ability to marry a person of the same gender and violent punishment.

Similarly to Adidas, Primark created a range of clothing and accessories, in pride colourways in 2018, with a new range launching this year. Partnering with the Stonewall charity, the brand created a capsule collection which pledged to donate 20% of the sales profits to the charity.

There are, of course, some key positives to this movement. For a start, Primark teamed up with a world-recognised LGBTQ+ charity and pledged to donate a percentage of profits, however, 20% doesn’t really seem like a great deal for such a large and profitable company.

Although this also meant that merchandise was more cheaply available, meaning that it didn’t cost the world to show your pride, it also came at the expense of the people who work to create the garments.

The range was made in Turkey, which is recognised as having a poor record when it comes to defending the rights of LGBTQ+ people. Essentially, people felt that it was unethical to have workers create garments which bear messaging which is illegal for them to voice themselves, in their own country.

Steve Taylor, the co-founder of the UK Pride Network and the communications director at EuroPride said; “It is unfair to ask people to do the messages in countries where LGBT rights are a pipe dream and we must not do it.”

However, it was revealed that H&M produced their ‘Love for All’ collection in Bangladesh, a country where being homosexual is punishable by death or life imprisonment. The brand also manufactures its Pride range in Turkey and China, which, as previously mentioned, have questionable and harmful attitudes towards the LGBTQ+ community.

It’s clear from the way that the majority of brands behave is that they’re too worried or frightened of scaring away customers who don’t consider themselves part of or actively support, the community.

Instead, they phone it in, creating a range of t-shirts and hats adorned with generic slogans which could pretty much apply to anyone. Although the sentiment is nice, what does it really achieve beyond lip service? What applecart is it really upsetting? We’re beyond this being even remotely provocative, now we want, expect and deserve more.

Apprehension demonstrates that the brands are not sincere about a permanent commitment to working with, supporting and representing the LGBTQ+ community. Brands who are prepared to truly put their money where their mouth is are generating meaningful campaigns, making significant donations to LGBTQ+ charities and providing fair representation, all year round.

In an interesting turn, London Pride partnered with Pride in London for the first time last year. The brewer designed and ran a series of outdoor ads for its campaign in Oxford Circus to celebrate.

The messaging was clear “You wait hundreds of years to see a gay beer ad” on the first, followed by, “And then two come along” on the second. This aimed to challenge outdated stereotypes, particularly those around male beer consumers.

Finally, one of the key messages that brands need to learn from Pride is that they need to remember this community all year round. It may seem simple, but for many brands, if they’re only representing the LGBTQ+ community in June, then is it really support?

Maltesers have begun to diversify including a range of people in their adverts in recent years. In one advert, a group of women are having a discussion about dating when one of them suggests she has been discriminated against. When questioned by her friends if it’s because she is a lesbian, the woman replies with ‘I’m an accountant’.

The light take on the topic aligns with the brand’s values but also supports in integrating more LGBTQ+ representation into our everyday adverts.

With similar entrants in 2018 from Kellogs which featured two well know drag queens, McCains which depicted a range of different families including same-sex partnerships and Rowse Honey who put a playful spin on Goldilocks and the Three Bears story with three gay men living together.

The bottom line is, if you are truly looking to support the LGBTQ+ community, you need to start internally, ensuring that your staff and workers are not discriminated against, are offered equal opportunities and are not being exploited.

Equally, if you’re looking to support the community wholeheartedly, it’s important to consider the people you work with, including endorsements, ensuring that you do not employ the voices of those who are known to have anti-LGBTQ+ opinions.

From here you can better grow and learn how to effectively support the community, whether this is through charitable donations, sponsorships or ensuring fair presentation all year round, in any of your advertising and marketing materials.

There’s no call to action at the end of this blog, but please consider supporting local and global LGBTQ+ charities, such as Stonewall.